A downloadable game for Windows

Time Decay was an experiment made for an English class in university in 2014.

While the class was an English class, the goal was to tell stories and explore themes using our years of English education as a backdrop for a new work. Students would take the semester to create and release a work based on a central theme. During my semester, the theme of the class was "interpretations of time."

I wanted to explore time by using frame-rate changes as a way to delay or speed up - using an element of videogames most players take as static and turning it into a currency, one that could break the game if the frame rate reaches 0. Layered on top of this, the game measures "time" in units of minimum wage in the United States (in 2014). Ultimately, the mechanic of fluctuating frame-rates could couple nicely with measuring time in US currency for several visual themes and potential storytelling. I was leaning heavily towards Utopian / dystopian themes with smatterings of technophobia. However, I was unable to attach a fitting narrative framework to the game, nor was I able to come up with an art style would supplement the core of the game.

As I struggled with Time Decay, another game dealing with the theme of “time” took hold of my creative process. Rather than experiment with frame-rates and measuring time in currency, I ultimately created RUNNER, an idle infinite runner. In RUNNER, the player only needs to press the right arrow key to complete levels and advance through play. This game explored minimal gameplay and encroaching boredom while bombarding the player with overwhelming juiciness. When Time Decay was suffering from a frustrating lack-of-direction, RUNNER’s design came easily and joyfully.

Ultimately, both games were submitted to the class. RUNNER was easily the highlight of the two projects and Time Decay existed as an interesting, yet extinguished, experiment. In that vein, RUNNER was released online, and Time Decay remained in thumb drive folders, waiting for inspiration to eventually strike.

Although Time Decay didn’t live up to my hopes in most aspects, it remains an experiment I’m proud of. With that said, I wish that the placeholder art was more inspired, that the mechanic was easier to communicate (or that I had communicated it clearer), and that the goal, level, and genre were better crafted. Maybe someday, I’ll figure out how to make this combination of elements work, or maybe I’ll be able to scrape aspects of it into new works. If not, I’m happy that it is submitted here to #FragmentJam.

On a final funny note, even as I wanted to submit Time Decay to #FragmentJam, I struggled writing about this game almost as much as I struggled making it, drawing the submission process from a single afternoon into a two-week procrastination.

Thank you for reading, and I hope you gain something from this experiment!
- James Earl Cox III 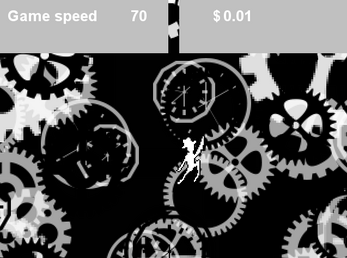