A downloadable game for Windows

Harvey Johnson joined my crew at SeeminglyPointless.com and was to prove his tallent by participating in the GameBoyJam. About halfway through the jam, he decided to take a break from games and do some urban exploration of an abandonded facility a few hours away from his appartment.

Harvey found a CD and a note addressed to him in one of the abandoned buildings. I know this because he later tweeted a picture of it at me accusing me of planting it as a joke.

A day later, I heard he wasn't responding to people, so I went to see if he was doing alright. His apartment appeared untouched when I arrived, sans a glitched game screen and a sheet of paper saying "James upload this game." I didn't want to upload it, but I couldn't shake off the whispering I heard in the dark and the feeling that I was being watched. This went on for a full day until I finaly caved in and uploaded it. I don't feel as afraid in the dark anymore, but I will never open this game.

I uploaded some footage I got from his phone, and a few relevant pictures here. I just want to make sure people know what they're getting into. I'm afraid that if I try to hide the game, the shadows will come back, and I don't want to end up like Harvey.

Last bits of info on Harvey:

I linked the game's webpage to Harvey's page as I feel that's the most relevant. And I refer to whatever was stalking me as 'shadows' because I found several links to this site in his browser history:http://www.shadowpeople.org/

New information since the game's upload:

Since "Mr. Kitty Saves the World" was upload on GameJolt, it has been featured, posted on a few blogs, as well as in some forums. In other words, it has been played more than once. At first, I wondered if I had imagined it all. Maybe Harvey did just leave. Maybe the shadows were all in my head and the voices just paranoia. But then I was contacted by several game survivors, people who received similar instructios to what I have gotten. The most shocking example was brought to my attention by Nik Sudan who left Mr. Kitty in his downloads folder and woke up with this on his arm:https://twitter.com/NikSudan/status/357877283018665985/photo/1

In case you wonder if it was a prank pulled by a friend, he lives alone.

In terms of gameplay, from what I've seen of other people playing it, it seems that Mr. Kitty Saves the World is a finite runner.

As a warning: If you play this game and are contacted by whatever created it, please be willing to disapear. I know this sounds awful, but it has become extremely apparent that by following their instructions and not just disapearing, the game will continue to claim more lives. I am now sure that Harvey was doing the world a favor by letting them take him. Whereas I've hurt humanity by giving in. 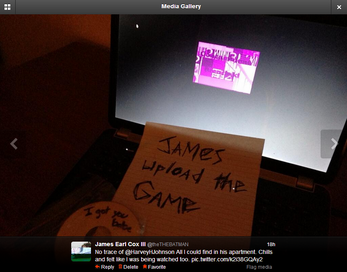 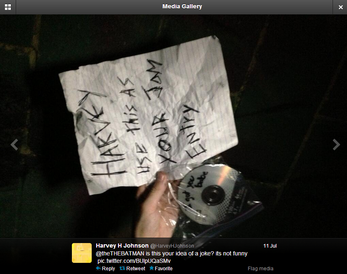